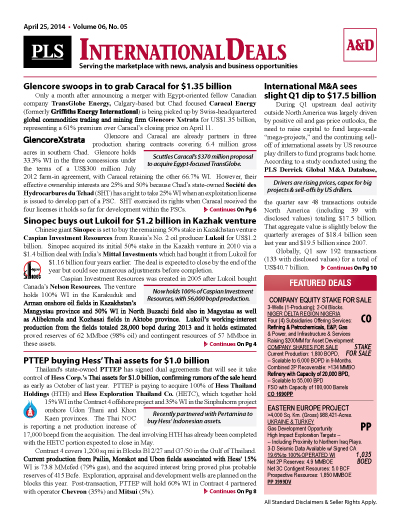 See what it is about before you buy. View a sample issue of InternationalDeals.

Need more information? Click the button to recieve more details about the InternationalDeals

Opportunity is a reflection of information.
Call 713-650-1212 For More Information
Search InternationalDeals:

IS - Shell’s upstream production up 8%, but profits fall to $16.5B - February 2020
Shell attributed its 23% YOY profit drop last year to lower prices combined with tough economic conditions. The supermajor reported $16.5 billion of net income to shareholders on a current cost of supply basis, its proxy for net profit, for 2019 compared with $21.4 billion for 2018. Revenue of $345 billion for the year was off 11% from the previous year. Cash flow from operations of $42.2 billion, down 21% YOY, was well above Shell’s $23 billion of capital spending for the year, which...
International Deals

ID - Chevron buys Anadarko for $50B; 6th-largest upstream deal - April 2019
Breaking the logjam that has blocked global deal flow since late 2018, Chevron agreed to acquire Anadarko Petroleum for $50 billion. The deal expands Chevron’s US onshore portfolio, primarily in the Permian Basin, adds deepwater Gulf of Mexico assets, and enhances its global LNG portfolio with the addition of Anadarko’s gas discoveries off Mozambique and proposed liquefaction project. “It creates attractive growth opportunities in areas that play to Chevron’s operational strengths and...
International Deals

ID - Petrobras sells off most of gas transporter TAG for $8.6B - April 2019
French power producer Engie and the Canadian pension fund Caisse de dépôt et placement du Québec will buy a 90% stake in the Transportadora Associada de Gas SA from Brazil’s Petrobras for $8.6 billion. The new owners will issue new debt to allow TAG, Brazil’s largest storage and transportation network, to repay its current debt holders and to maintain a 70:30 debt-to-equity ratio. TAG has operated as a Petrobras subsidiary since June 2014. Engie will take over operations and maintenance...
International Deals

ID - Saudi Aramco to take over SABIC in $69B transaction - April 2019
Saudi Aramco agreed to buy a 70% stake in SABIC, Saudi Arabia’s petrochemical giant, for $69.1 billion, merging the country’s two largest companies and giving Crown Prince Mohammed bin Salman’s plans to diversify the country a significant boost. The transaction is one of the biggest in the global chemical industry and formalizes a process that has been under discussion for more than a year. SABIC employs 34,000 people globally, lists 30% of its shares on the Saudi stock exchange and has a...
International Deals

ID - International M&A in Q1 fares better than US or Canada - April 2019
The international upstream deal market fared significantly better than the US and Canada in the wake of the late2018 oil price decline. That may seem strange since disclosed international deal values dropped 60% from $8.84 billion in 4Q18 to $3.56 billion in 1Q19, the lowest level since 2Q12, according to the Global M&A Database. However, compare that to US M&A’s 78% drop to a 10-year low of $4.17 billion and the 93% plummet to $52 million seen in Canada. Looking at the number of...
International Deals

ID - Carlyle to buy 30-40% of Cepsa from Mubadala for $3.6-4.8B - April 2019
The Carlyle Group has agreed to buy 30-40% of Madrid-based Cepsa from Abu Dhabi’s sovereign fund Mubadala Investment Co. The investment group said the transaction assigned Cepsa an enterprise value of $12 billion, implying payment of $3.6- 4.8 billion for the minority stake. Founded in 1929 and acquired by Mubadala in 2011, Cepsa is Europe’s largest privately held integrated oil and gas company. The transaction is expected to be completed by YE19. The transaction comes after Mubadala...
International Deals

ID - Vopak sells 3 Euro terminals to Aussie investor for $812MM - April 2019
Australian wealth manager Colonial First State Investments Ltd. will buy three terminals in Algeciras, Spain; Amsterdam; and Hamburg, Germany from Dutch storage company Vopak for $812 million (~€723 million). The sale, which Vopak said has an implied multiple of more than 10x EBITDA, is expected to close in H2. Vopak is working to shift its portfolio towards industrial, chemicals and LNG. In particular, it wants to expand chemical and bunker fuel terminals in Antwerp, Rotterdam, Singapore and...
International Deals

ID - Delek & Ineos leading contenders for Chevron’s UK North Sea - April 2019
Israel’s Delek Group Ltd. and UK-based chemicals giant Ineos are reportedly the frontrunner's for Chevron’s UK North Sea portfolio, Bloomberg reported in an article citing unnamed sources. The two companies are reportedly the frontrunners for the assets, ahead of Chrysaor, Premier Oil and Oman’s NOC Petrogas, which submitted bids for the assets. Since the news broke last year that the USbased supermajor was shopping its UK North Sea portfolio, various sources have said a deal could fetch up to...
International Deals

Get more news for InternationalDeals